This year, the Australian Saloon Car Series was replaced with a one-off National Championship race meeting to decide Australia 1. The inaugural Nationals meeting was awarded to Barbagallo Raceway in Western Australia, and eight competitors from SA made the journey across the Nullarbor to compete. 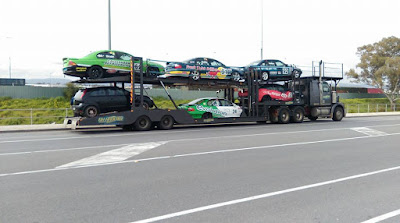 We put our VT (driven by me) and VN (driven by Thomas Walkom) on a truck along with two other SA cars of Mark Bryan and David Lines, and an AU owned by Victorian Phil Gray. Craig and I decided to make a holiday of it by driving across to Perth and taking a couple of weeks to come back afterwards. We did a front panel upgrade to VX headlights and front bumper on the VT before leaving. 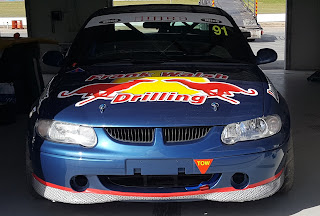 Practice on Friday started well with a few personal bests on old tyres, and then a bigger improvement while scrubbing in the fresh rubber at the end of the day. 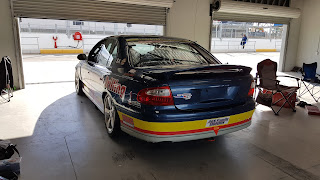 The heats were combined with early and late model cars, but split into two equal sized fields. We each did 4 of the 8 heats. I finished 10th out of 20 in heat 1, followed by 9th in heat 4.


Unfortunately I had a DNF in heat 6 after locking the rear brakes going into Kolb corner, and ending up buried in Barbagallo's infamous deep sandpit. We had changed to a different type of rear brake pads just prior to this race, and the crew chief told me to change the brake bias more to the front as they may be a bit 'grabby', and I forgot... The sand tore the rear bumper off of the car, but there wasn't any other damage apart from the car being full of sand.

As a result, I started near the back of the grid in heat 8, but was able to make my way back up to 10th.


I started the VT/AU final in 18th position (should have been a bit further up if not for the DNF). As we were waiting to go out onto the track, the heavens opened, and we had a very wet track for the 20 lap finale. We did not have any time to change to a wet setup. The start was very wet with poor visibility, and the safety car was deployed due to cars falling off before we had even finished the first lap. There were 2 more safety cars during the race.

In these treacherous conditions, my plan was just to finish without losing any spots. Luckily the conditions did improve a little as the race went on, but there was too much water on the track for it to dry out. I stayed on the track and was able to work my way up to 13th before the chequered flag.


We would like to say a big thank you to WA locals Damo Stephens and Andrew, Jim, and Des from Rightway Industrial for their assistance & hospitality on this trip. Congratulations Damo on a well deserved 3rd place overall in the VN/EA class. Congratulations also to Thomas Walkom for finishing 5th in the same class in my old VN.

Just after returning home, I got the opportunity to drive a car for a road safety advert for the Motor Accident Commission of SA. This involved driving a Toyota Camry on Port Road while being tailgated by former V8 Ute racer Gary Baxter. It was an interesting experience - stay tuned for the final product to go to air!

Our next race meeting is on 12th November at Mallala for the final round of the Master of Mallala Series. See you there!
Posted by Naomi at 10:42 pm No comments: