Round 2 saw us return to Mallala for the SA State Championship in rather 'trying' conditions. Saturday wasn't too bad, but Sunday saw a huge dust storm and very strong winds, followed by heavy rain. 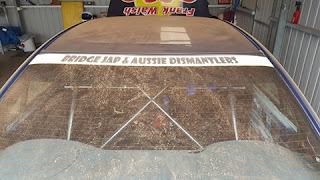 I qualified 4th out of 6 Saloon Cars, and finished 3rd in the two races on Saturday. I was 3rd again in race 3 on Sunday morning, although the dust was affecting grip levels and even visibility at times.

Race 4 wasn't so good, with me spinning the wheels at the start (and continued spinning the wheels in 2nd gear!), then had half a spin at the Northern Hairpin; and although I almost caught the car in 3rd by the end, I couldn't quite catch him before the line.

Race 5 was pretty bad with a very damp and greasy track. I had two spins and finished 5th, which was last place after David Lines had already gone home with engine problems earlier in the weekend.

I did get interviewed by South Australian online racing show On The Throttle during the weekend. Thanks to Cheyanne and Picko for coming out and covering our state race series.


Our next race meeting is the Saloon Car Nationals at Barbagallo Raceway in Perth, Western Australia on the weekend of 19th-21st August. This is the same weekend as Round 3 of the SA Series, so unfortunately I will have to miss that meeting. The Nationals will be a huge event though with 50+ entries from around Australia. The VT is currently undergoing some preparation work before going on the truck to WA in a few weeks' time.
Posted by Naomi at 6:42 pm No comments: