20th February saw us back at Mallala for the first meeting of the season. The SA state series has been changed back to a championship for 2016 (rather than a multiclub series) which I am happy about.

We took the VT out to a private practice day on 11th February. It was a fairly warm day but we had a good run. My tyres were getting pretty old and the high track temperature didn't help. There weren't too many cars out there so I had a fairly good clear run. The field was mostly made up of Renault Clios and their drivers were a nice friendly bunch; I'm not sure whether they are a club or just a group of friends.. Quite a few people came to have a closer look at the VT - there is always a bit of surprise when people see that it's a naturally aspirated V6, rather than a V8 or supercharged 6.

We also shared the day with a 1986 Benetton B186 Formula 1 (chassis number 5), which has been purchased recently by a friend of ours. This car was previously driven by the legendary Gerhard Berger and Teo Fabi. According to Wikipedia, "The Benetton B186, along with the Brabham BT55, Arrows A9 and other BMW engined- cars in 1986 are the most powerful Grand Prix cars ever built. The B186 in particular, being the most competitive of the BMW engined cars that season could throw out 1,350+ hp in qualifying trim, and about 900 hp in race trim." My husband Craig Walkom has been very excited to be able to work on this car recently - who wouldn't be? He rebuilt the gearbox and did some other general maintenance before the practice day. Dunlop V8 Supercar Series driver Josh Kean was the lucky test driver. 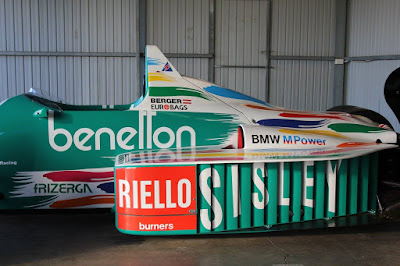 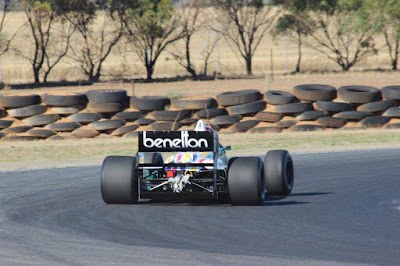 With that excitement over, we turned our focus back to the VT and round 1. We realised that the tyres were way past their prime, so thanks to Frank Walsh Drilling we bought a new set for the race meeting. Craig also did some work on the gearbox because I have been having a bit of trouble with gear selection (especially going from 2nd to 3rd).

When I hit the track for qualifying, something immediately didn't feel right. I almost looped it at the first turn after exiting pit lane, and the car felt quite unstable, with the grip level no better than on the old tyres the week before. We had put a different sized sway bar on the rear and I didn't really like the feel of it so we ended up changing it back to the softer one. That made it a bit better but things still weren't quite right. After speaking to our local Saloon Car guru Bruce Heinrich, we discovered that the side walls were different on the new batch of tyres and the pressure had to be adjusted to compensate. This made things immediately better (although the new tyres still don't seem as good as the old spec to me...).

I qualified 3rd out of 6 Saloon Cars, and ended up finishing 3rd in all four races, although the order of the others changed around a bit during the day. I did a personal best of 1:20.6524 in race 3 and my times were fairly close to the leaders all day. I think the track was a little slow because some of the others in late model cars would normally be in the 1:19s but everyone seemed stuck in the 1:20s. That's a good sign to me because I still set a PB and maybe could have cracked the 19s on a cooler day. 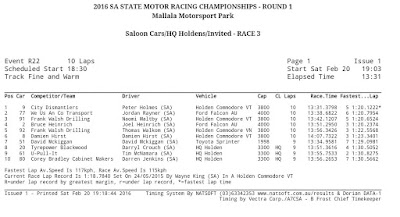 Here's a video of the first few laps of race 4 under lights:


And of course, a video of the Benetton F1 at the practice day: