On May 18th we headed back out to Mallala for Round 2of the SA state series. I was back in the VN after my run in Josh Kean's VT at the Shannons Nationals, and I had a few new things to try. A couple of the things I had learnt also worked in the VN, and a couple didn't. The two cars have some fundamental handling differences so they require a different driving style to get the most out of them.

In qualifying I was 6th out of 9, which was 4th out of 6 early model cars. My lap times weren't too bad but the competition was strong and Mark Bryan in particular had picked up a bit of extra speed. In race 1 I finished 7th, again 4th out of the Trophy class cars.

Race 2 was slightly better with a 6th place finish overall. I got the same result in race 3 but managed to improve my best lap time to 1:22.7534 and achieved a string of consistent 1m 22s laps which is normally pretty good, however I couldn't quite catch the cars in front and the ones behind were nipping at my heels. I will need to try to lift my game before round 3 when we are again playing host to a number of WA Saloon Cars and maybe a few Victorians too! See you there for some great racing!

Thanks to Chooks Custom Graffix for jazzing up the VN with some great new stickers :) 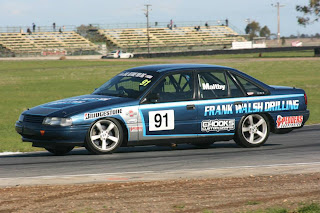 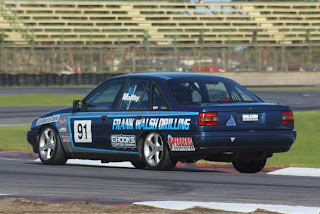 Photos by Rosalie and Darren Siddell
Posted by Naomi at 9:22 pm No comments: