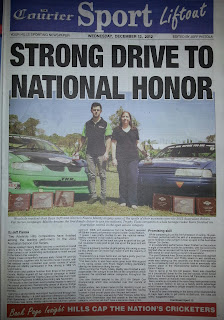 At the end of 2012, Josh Kean and I were featured in the Mt Barker Courier newspaper. Click the picture to see more!

On a related note, congratulations to Josh on his success in his debut year of motor racing, coming 2nd outright in the Australian Saloon Car Series at his first attempt. Josh will be driving the ex-Jason Richards Team Dynamik Commodore in the 2013 Kumho Tyres V8 Touring Car Series. Josh is one to watch and will no doubt go on to bigger things. He will be kicking off his campaign at Eastern Creek this weekend 22-24 March.